Earth’s species are dying out faster than ever before, according to a new UN report. It’s clearly a global crisis – but it also directly affects us in our own local environment. We have to find a way to halt this catastrophic crisis in nature, and sustainable agriculture could provide the answer.

The report warns of a so-called “sixth mass extinction” of plant and animal life with up to one million species disappearing in the coming decades. Human activity has degraded three-quarters of the world’s land surface and two-thirds of marine environments. According to WWF, wildlife has already declined by as much as 60 percent since 1970. If we don’t act fast, it’s not just nature under threat – human survival is also at stake.

Nature’s problem is our problem.

Without thriving biodiversity, we will have no clean water, food on the table or access to medicines and energy. The crisis of nature is also an economic, security and social crisis, which is particularly acute for the quarter of the global population who depend on agriculture for their livelihoods. Farmers and farm workers are already suffering from degraded soil, desertification, salt water pollution, soil erosion and excessive use of toxic pesticides.

If we are to protect nature, we have to change the way we farm our land and produce our food. Vast areas of monoculture crops which ruthlessly eliminate all other biodiversity are unnatural and risk destroying local ecosystems, leading to the extinction of both animal and plant species. Reintroducing crop diversity and sustainable farming methods will have positive long-term impacts. For example, planting trees to act as shade over sun-sensitive crops saves water as well as helping local ecosystems to flourish. Rejecting the use of toxic pesticides while embracing organic farming, together with innovative techniques for producing more food from smaller plots, can all help slow the loss of nature. Fairtrade’s environmental standards, for example, prohibit cutting down protected forests in order to plant more crops – a major problem in much of West Africa where cocoa production is a well-known driver of deforestation. If cocoa farmers were able to earn a decent income by producing more from their existing plots, they would have less incentive to destroy irreplaceable woodland.

It is depressingly self-evident that we humans can destroy entire ecosystems with our major industries, our over-consumption and our unsustainable farming practices. More encouragingly, however, many of us are creating new ecosystems – albeit on a smaller scale – in our own back yards. Simple tricks include growing pollen-rich flowers, building bug hotels or letting the grass grow wild to replace fast-disappearing wild flower meadows. By encouraging a rich biodiversity to thrive in our own gardens, we benefit the wider ecosystem.

Similarly, we need to encourage individual small-scale farmers and growers to adopt more environmentally-friendly agriculture. Restoring habitats helps create a more favorable social and economic environment in the long term, and increases the chances of a stable, sustainable income for farmers and their families. It also reduces growers’ vulnerability to extreme weather and climate shocks. Using fewer chemicals has both human and environmental benefits, while planting more trees helps absorb carbon dioxide and reduces the huge impact of agriculture on the climate. But changing the farming habits of a lifetime can be daunting and may involve short-term costs. Consumers, businesses and governments all have a part to play in encouraging farmers by showing there is a significant demand for sustainably produced food. 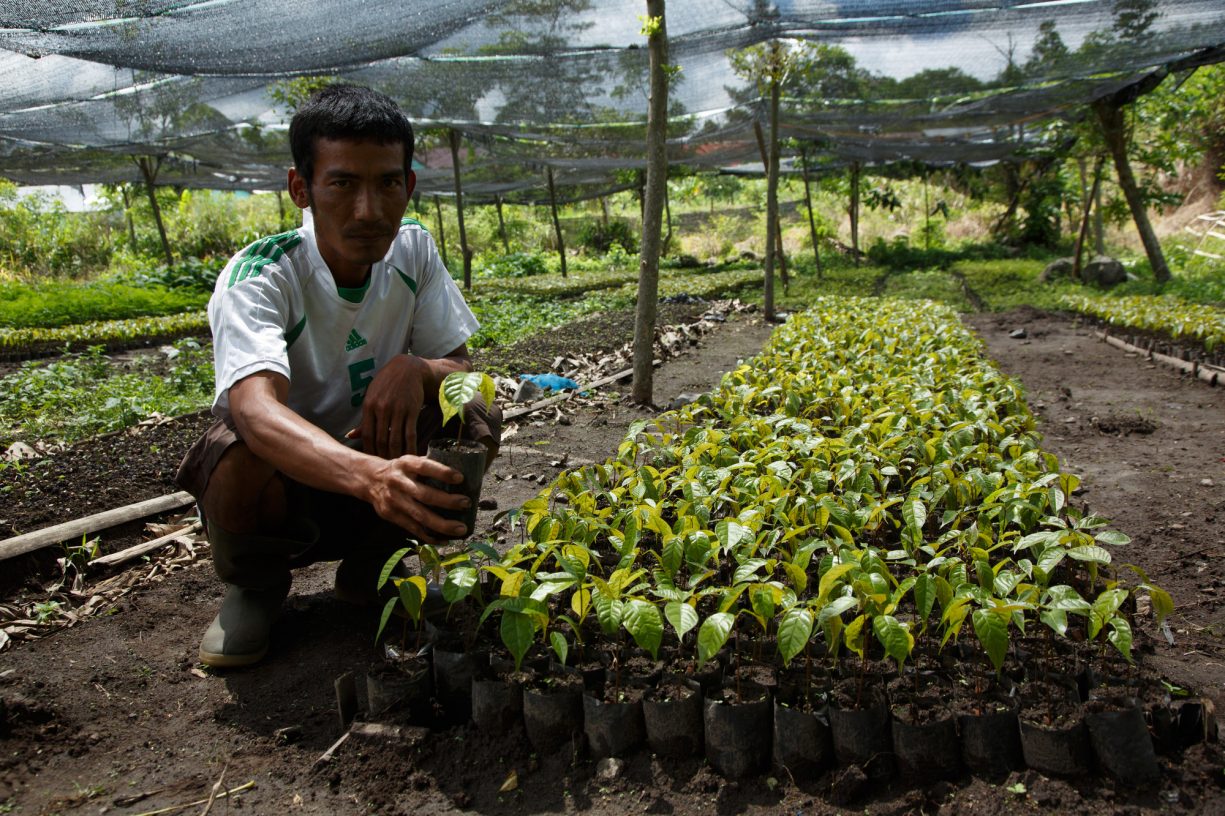 Where does Fairtrade fit in?

Fairtrade mainly certifies small-scale farmers who sign up for rigorous standards, which include environmental criteria such as banning the use of harmful pesticides. Fairtrade also organizes training for farmers so they can learn how to grow in harmony with the local environment and avoid creating monocultures. Many producers also invest their Fairtrade Premium – the extra money they get for selling on Fairtrade terms – in various projects aimed at restoring natural areas or reforestation. Fairtrade is a choice for nature, and a way of farming that safeguards both humans and the environment.

Photo Details: (Top) Coffee farmer and farm at Fairtrade farm in Indonesia where they are focused on planting new seedlings and shadow trees and increasing environmental education in the wake of a 6.5 earthquake in 2014. (Right) Farm worker in Indonesia works in nursery where he runs a project to provide thousands of seedlings for a carbon trading project. 25,000 trees have already been planted under this project, with 40,000 trees to be planted in the next phase. Photo by: Nathalie Bertrams