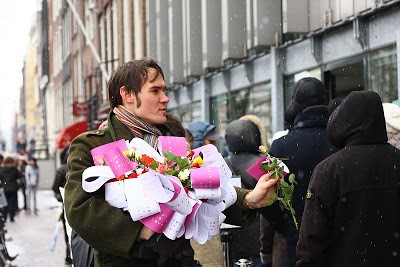 Federico Hewson is a community artist in New York City who uses flowers as the medium for his work. After using Fairtrade flowers in an art project ten years ago, he became passionate about flower farm workers in Colombia. Federico writes about his journey with flowers and shares his thoughts about how anyone can become an activist and support what they believe by using their unique talents.

My journey in flowers started a decade ago in Amsterdam where I was wrapping poems of love and peace to thousands of stems as part my Valentine Peace Project. These poems were written by schoolchildren, artists like Yoko Ono, musicians like Alison Crowe, and peace-makers like Marshall Rosenberg. Each was wrapped around a donated Fairtrade rose or carnation and included statements from the children of the Zimbabwean flower workers as well as this message:

Reflections on Love * Poems on Peace * Dialogue, Transparency and Respect in Sustainable Development.

Giving away these bundles on the streets and canals of Amsterdam would not have been possible without a donation of Fairtrade flowers from a Dutch floral company. They introduced me not only to Fairtrade as a concept, but to some of the people benefiting from Fairtrade – the children in Zimbabwe.

Fairtrade was a key part of developing the Valentine Peace Project. By physically connecting writings on peace to Fairtrade flowers, I was connecting the vision of peace to the work of ethical trade.

I took my growing awareness of Fairtrade, and why it is needed, back to the United States, where I learned more about the poor working conditions of many flower farm workers. The United States imports more than 75 percent of its flowers from one country – Colombia. Here, as in flower farms globally, most workers are women. Many are mothers working long hours to feed their families. Many of these workers are exposed to dangerous chemicals and are living off of $8 a day.

From this, I concluded: Farmers deserve better working conditions – and people globally need to stand united with them.

Even though we see flowers in almost every corner shop and grocery store, many people don’t think about the people who grew them. Therefore, for International Women’s Day this year, I passed out dozens of roses and on each one, I threaded a card reading Know Your Flower.

I hoped to bring the receiver’s attention to the Colombian women workers who grow most of the flowers for New Yorkers. For many people, this information was completely new – they had never thought of the hand that cultivated this beautiful bit of nature.

The Know Your Flower project hit a chord because later that year for Mother’s Day, a couple of stores in Manhattan participated in my graduate art activist project, Hidden Flowers. For this, they sold bouquets wrapped in my specially designed floral wrapping paper that included the message:

Many hands touch a flower on its way to you – Whose hands are these?

75 percent of the flowers imported into the US are from Colombia; many of the workers are mothers who work long hours under harsh conditions. There is a certification system called Fairtrade that checks the working conditions on farms.

We all have a hand in improving the lives of flower workers. From New York to Colombia. From hand to heart.

My next journey – Fairtrade for Colombian flower farm workers

My past art projects focused on days that hold special meaning for many – Valentine’s Day, International Women’s Day, Mother’s Day. By highlighting times when many wish to celebrate the women in their lives, often through flowers, I hoped to raise awareness of the women who grew those flowers.

Coming up, I’m planning to expand my Hidden Flowers Project to more locations. I also hope to become more directly connected to flower farms and their workers. I’m in talks with companies in the United States to support them to find retailers willing to sell Fairtrade certified Colombian flowers. If customers asked for Fairtrade in their local stores, more big corporations would look to meet that demand.

When I started my journey with flowers, I didn’t think it would become so focused on ethical trade. Yet, that is where I found myself. By using my particular abilities, I think I’m doing the best thing I can do to support flower farm workers. Not everyone needs to be an activist or start a picket line to join a movement or make a difference.

If we all use our unique skills such as creativity, artistic ability, communication or our connections in our communities, I believe we could work together to ‘curate’ real change locally and internationally.

So, I ask you: What are you good at? And how will you use your gifts to support the people and causes you care about?