The small-scale farmers’ cooperative initially set up its own company to buy its cocoa and sell it to the Government Cocoa Buying Board. They named it “Kuapa Kokoo” which in Twi, the local language, means “Good Cocoa Farmers Company”. Their motto is “Pa Pa Paa” which means “the best of the best.” In 1997, the members of Kuapa Kokoo voted to invest in a chocolate bar of their own: Divine Chocolate.

Fairtrade is important to the members of the cooperative because the certification system has helped put in place tools and standards that improve the lives of cocoa farmers. These improvements include:

Fairtrade Premiums, the extra sum paid to the cooperative, have been invested in schools built-in local farming villages, women’s training programs that focus on literacy and numeracy, a bicycle program that enables children to get to and from school more quickly, clean water projects and a radio program which gives farmers access to information and resources.

You can celebrate National Chocolate Cupcake Day with Kuapa Kokoo too! Keep reading for a simply, well, divine recipe to make at home.

These sweet praline chocolate cupcakes have just the right balance of texture, making them flavorful and a joy to savor. 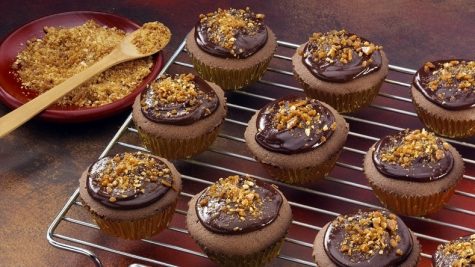 To make cupcakes:  Place all the cake ingredients in a mixing bowl and beat well until smooth. Divide the mixture between 18 cupcake pans lined with paper cups. Fill them no more than 2/3 full. Bake for 15-18 minutes at 375°F until risen and firm. Leave to cool.

To make the praline, heat the organic sugar and water in a small pan over a low heat until the sugar has dissolved. Stir in the almonds. Bring to a boil. Boil until the syrup turns into a golden caramel. Pour onto an oiled baking sheet and leave to cool and harden.

To make the icing, heat the chocolate and milk in a pan over a low heat, stirring until the chocolate has melted. Then stir in the butter. Remove from the heat and stir in the organic powdered sugar until smooth. Spoon the hot icing over the cakes. Place the praline in a plastic bag and beat with a rolling pin until finely crushed. Sprinkle over the icing before it sets and leave to set.