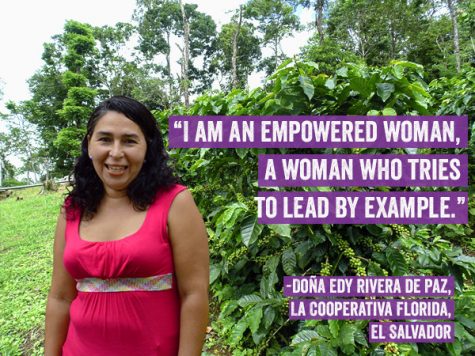 Today in Washington, DC, FoodTank is hosting the International Forum for Women’s Food Leadership in the Global South, bringing together the experience of eight women food leaders. In conjunction, we interviewed Doña Edy Rivera, a coffee farmer in El Salvador.

A Salvdoran coffee farmer, a strong advocate for other women, and a caring mother. Women make up 51% of the population in El Salvador, according to a recent census. These women are the engine of the economic and social systems. They pass on culture to future generations and care for the environment.

I am 39 years old and I am a rural woman. I have dedicated my life – since I was a child – to the cultivation of Fairtrade coffee. In addition, I have a garden that not only feeds my family, but generates additional income. Since I was nine, my mother was a member of the Cooperativa La Florida, so practically all my life has been surrounded by the coffee bushes. In 2007, when she died, I formally became an active member of the cooperative.

I firmly believe that I am an empowered woman, a woman who has tried to lead by example. I have fought publicly for the right of rural women to participate in the decision-making process and enjoy membership rights.

In 2010, I became Treasurer on the Board of my co-op and I am currently Vice President. La Florida is affiliated with APECAFÉ another cooperative where, through perseverance, I have been selected as a Board member as well. And as if that weren’t enough, I became the first rural woman to be elected to the Board of El Salvador’s national Fairtrade body (CESPPO) CLAC, a group that represents all Fairtrade farmers and workers nationwide.

The truth is that it was not easy to break into a culture dominated by men.

But the gains have been worth it, because alongside me are many rural women who need not only representation, but they need to know their rights, take ownership of their role as women.

If you ask me what has been my greatest achievement, I would look back a year ago to a group of women with whom I shared all that I had learned in different training sessions. At the beginning, many of these women would not even look you in the eye when you spoke with them. But a year later, they have made substantial progress. We even organized a credit union. Everything is a process. It’s not always easy, but it’s also not impossible.

If I could share a few words to rural women, I would say that they need to know their rights, internalize them. It is important that everything that they sow must be sown with love; that they realize that the economy they hold in their hands is productive, that they think about their growth as women and that they share this knowledge with their sons and daughters, the love for the land and all that it gives us.