Ben & Jerry’s supports Fairtrade because it is a worldwide movement working to ensure that small-scale farmers in developing nations can make it in the ultra-competitive global marketplace. 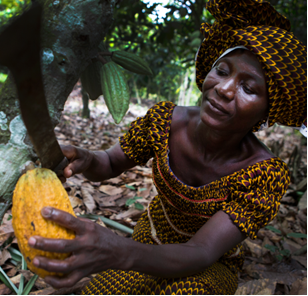 One of Ben & Jerry’s founding principles is what they call “linked prosperity”, the idea that those who are successful should work to improve the world around them. Fairtrade puts this idea into action. All farmers in the Fairtrade system agree to use environmentally friendly farming practices, implement fair labor standards and invest in their communities. The Fairtrade Premium, an additional amount of money paid on top of the fair price that farmers receive, helps make those investments happen. Ben & Jerry’s source Fairtrade-certified ingredients like chocolate, coffee, bananas, sugar and vanilla.

In 2017 alone Ben & Jerry’s paid $3.4 million in Fairtrade Premium to small-scale farmers around the world. 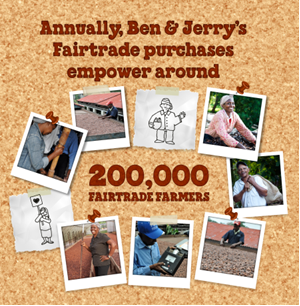 Ben & Jerry’s source Fairtrade sugar from a variety of small-scale farmers, including those in the Belize Sugar Farmers’ Association. In Belize, up to 85% of the population in some rural parts depend on the sugar industry, making Fairtrade Premium investment projects so important. For example, newly implemented alternative pest management practices helped save the Association’s sugar crop, while drastically reducing the need for harmful pesticides.

Ben & Jerry’s source from cocoa growers in Côte d’Ivoire, which produces about 40% of the world’s cocoa. With the $1.5 million in premiums, cocoa growers have installed solar panels, built a new medical clinic, and invested in rural schools and scholarships for children.

Fairtrade is about making sure people get their fair share of the pie. The whole concept of Fairtrade goes to the heart of our values and the sense of right and wrong. Nobody wants to buy something that was made by exploiting somebody else.

Though most of the world’s vanilla is grown in Madagascar, many farmers there are struggling to make a living. When farms fail, communities often follow. Sustainable Fairtrade prices help end this cycle. In 2017, they paid $22,000 in Fairtrade Premium, that’s on top of the Minimum Price that they pay. The co-ops decided to spend this money rehabilitating a health center, repairing a school and building an office.

Since 2010, Ben & Jerry’s has sourced over 300,000 pounds of coffee from Mexico. Coffee Fairtrade Premium funds have benefitted more than 1,400 farmers and their families through the construction of a medical center, libraries, schools and the production of 400 tons of compost!

Hungry yet? Find out where to pick up a pint near you!