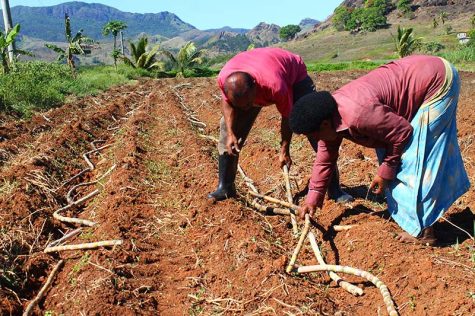 When Cyclone Winston drove a destructive path across the Pacific in February 2016, it was just the latest in a series of extreme weather events to hit Fiji. Winston left 44 people dead in its wake and is estimated to have caused more than $1.4 billion worth of damage across the region. As so often before, farming communities bore the brunt of the devastation. Communities there are struggling to adapt to the effects of climate change.

The COP 23 Climate Change Conference is taking place November 6-17 in Bonn, Germany. Fairtrade farmers from Fiji are among those attending the conference to highlight the impacts of climate change and push for change on a global level.

Like many low-lying small island developing states, Fiji is especially vulnerable to the impacts of climate change, and no one knows this better than the sugar cane producers who contribute around 12 to 15% of the country’s GDP. The islands are home to the three largest Fairtrade small producer organizations in the Pacific region. Cyclones – together with the droughts, floods and sea level rise which are a regular occurrence here – are having a devastating impact on sugar farmers, their families and communities.

Even Fairtrade certified sugar producers – who are in a better position than most thanks to the extra money they get from the Fairtrade Premium – are struggling. “We’re seeing changing weather such as drought during the rainy season, and this affects the growth of the sugar cane,” says Mohammed Rafiq, Chair of the Fairtrade certified Labasa Cane Producers Association. “Sugar cane yields are down, production is affected, and severe cyclones destroy the cane.”

Mohammed’s fellow sugar planter Ronal Kuma, who manages the Fairtrade certified Rarawai and Penang Cane Producers Association, agrees. “We’ve had a drought now for more than six months,” he says. “It started after the last cyclone, which destroyed everything. It will take four or five years to get back to previous levels of production.”

THE FAIRTRADE PREMIUM HAS BROUGHT AROUND $12 MILLION INTO FIJI ALREADY, AND SOME OF THAT MONEY IS BEING INVESTED INTO PROJECTS WHICH WILL HELP SUGAR CANE GROWERS BECOME MORE RESILIENT TO CLIMATE CHANGE.

The impacts of climate change on Fiji’s sugar producers are not hard to see. As well as the obvious destructive force of tropical storms, creeping impacts such as changing weather patterns, rising temperatures and loss of land to coastal and soil erosion are also a problem.

Ronal looks glumly at the dry cane fields. “The rain should have come by now. Rain always used to fall at this time, but not anymore.”

Pravin Sawmy, Business Development Manager for Fairtrade Australia New Zealand, understands why farmers feel under threat, but points to the work that is already being done to try and tackle climate change.

“The Fairtrade Premium has brought around $12 million into Fiji already, and some of that money is being invested into projects which will help sugar cane growers become more resilient to climate change,” says Pravin.

“For example, farmers are using some of the premium money to dig ditches and culverts so when there’s heavy rain, it is able to drain away more easily instead of flooding the fields. They are also learning how to protect the soil from evaporation so they are better prepared for droughts.”

Intercropping – planting other crops like legumes, pulses and water melons in amongst the sugar cane – is another way the sugar farmers can make adapt to climate change.

“Intercropping means families have more food, and it also enriches the soil with nutrients – which has the added benefit of reducing the amount of fertiliser needed,” says Pravin. “Cane farmers in Fiji have very low incomes, and climate change directly impacts their incomes, leaving them vulnerable to shocks. Intercropping helps to protect against food insecurity.”

Parbindra Singh is president of the Lautoka Cane Producers Association. He’s so concerned about climate change and its impacts on sugar production that he’s travelling nearly 10,000 miles to attend the UN climate change talks in Bonn, Germany and urge governments to take action.

“With the right support, farmers can become more resilient,” says Parbindra. “Fairtrade farmers are better placed to adapt and mitigate the effects of climate change. But we can’t do it by ourselves. It’s up to everyone in the supply chain – producers, traders, retailers and consumers – to reduce their carbon footprint and play their part.”

Around the world, Fairtrade farmers are on the frontlines working to adapt to the effects of climate change.